Q: Wealth tax has been tried in many countries in Europe and it didn’t work. Why do you think it would work this time?

A: The European wealth taxes of the past are not examples to follow. They kicked in at far too low a threshold (around €1.3 million ($1.5 million)) and were riddled with loopholes as a consequence. In the French case, a business owner was exempt as long as he or she did not sell the company. That led to successful serial start-up founders being taxed while sleepy entrepreneurs were not. And whereas a moderately wealthy French household’s financial portfolio could easily generate a negative after-tax return, the effective tax rate on the wealth of the country’s 100 richest individuals was a ridiculously low 0.02%.

A wealth tax should treat all assets equally and have a high enough threshold. Warren is proposing a 2% tax on wealth above $50 million. The equivalent threshold in Europe would probably be lower.

The world’s dollar millionaires have about 192 trillion dollars fortune (according to Credit Suisse). Imagine just 1% wealth tax on the top 1%, it will give us about 2 trillion dollars every year. If you want to solve the crisis of our world, the 1% richest people must be part of the solution. It is morally correct to tax wealthy people.

The estimates for a European wealth tax suggest that a progressive tax on net wealth could generate revenues between 3% and 10.8% of GDP.

A: It’s understandable that many are mistaken around millionaire tax flight. For one, the rich are well known to avoid taxes. There is a large “income defense industry” of lawyers that help them minimize their tax burden.

It turns out that place still matters for the rich — much more so than we might think.

The rich may travel a lot, but they rarely change where they live and file their taxes. In a study from the US only 2.4% of millionaires move across state lines in a given year. Low-income earners have almost twice that rate of migration (4.5%). In general, migration declines with income: The poor are searching for economic opportunity, but the rich have found it.

With success comes many spoils that tie people to place. Most millionaires are the “working rich,” and have established careers in finance, consulting, medicine or law. Almost all of them are married, and most have children at home. They are homeowners, and a quarter of them own a business too.

Q: Rich people avoid paying taxes through established tax havens. Wouldn’t it be better to use the efforts fixing that?

A: It is more difficult now for the super rich to stash their cash in far flung tax shelters. There have been high profile cases outing grand corruption and extreme tax minimization, (the Mossack Fonseca aka Panama Papers, Kleptopia etc), but the real story is the general trend. In country after country, BEPS measures (Base Erosion and Profit Shifting) are biting. Some 125 countries are now members of the BEPS steering body, the Inclusive Framework.

Q: Rich people are already paying so much taxes. Why do they have to pay more?

A: The richest man in the world, Amazon founder Jeff Bezos, reportedly earns a salary of just $81,840. Billionaires generally don’t make their money from big salaries; their wealth is built on investments in companies and other assets, from real estate to art. The money they make on these investments is taxed lower than the money you make from working.

The wealthiest can — perfectly legally — pay income taxes that are only a tiny fraction of the hundreds of millions, if not billions, their fortunes grow each year.

Q: Isn’t it better to let rich people do good in the world through Philanthropy, which they are already doing?

A: Problem with this is that the common assumption that philanthropy automatically results in a redistribution of money is wrong. A lot of elite philanthropy is about elite causes. Rather than making the world a better place, it largely reinforces the world as it is. Philanthropy very often favours the rich – and no one holds philanthropists to account for it.

Moreover, according to a OECD report, philanthropic funding only provided USD 23.9 billion for development over 2013-15, corresponding to 5% of the amount given through ODA. The figures are simply too small to change the world.

If we millionaires are going to be “for humanity,” we have got to go beyond philanthropy and recognize that we need to be taxed. No matter how generous and smart we think we are in our private giving, unless we shift from trying to minimize our taxes to advocating to be taxed more, we are not living up to being “for humanity.”

Q: Are you sure that wealth taxes do not distort behavior in a way that is harmful to economic growth and national prosperity?

A: There is no evidence that a wealth tax will halter economic growth. In fact, in a recent paper by economists Fatih Guvenen, Gueorgui Kambourov, Burhanettin Kuruscu, Sergio Ocampo-Diaz, and Daphne Chen argues that a wealth tax may encourage greater innovation. This is because, in their view, wealthy taxpayers who use their wealth in unproductive ways would be expected to earn a lower rate of return than superstar innovators. This would mean that the wealth tax would disproportionately impact the unproductive wealth, incentivizing those owners to deploy their assets productively in search of a higher return.

A: Generally, a wealth tax works by taxing a person’s net worth, rather than the income they earn in a given year. In countries that impose a wealth tax, the tax is only levied once assets reach a certain minimum threshold. In Norway, for instance, the net wealth tax is 0.85% on stocks exceeding $164,000 USD in value.

Wealth taxes can be applied to all of the assets someone owns or just some of them. For example, the wealth tax can include securities and investment accounts while excluding real property or vice versa.

In Argentina a one-off tax on Argentinian’s wealthiest brought in around $2.4 billion for pandemic recovery. Overall, the amount that the taxes brought in comes to about 0.5% of the country’s GDP, according to the Buenos Aires Times. Reportedly, this was a higher amount than expected.

A: Inequality is rising for more than 70 percent of the global population, exacerbating the risks of divisions and hampering economic and social development. The richest one per cent of the population are the big winners in the changing global economy, increasing their share of income between 1990 and 2015, while at the other end of the scale, the bottom 40 percent earned less than a quarter of income in all countries surveyed.

One of the consequences of inequality within societies is slower economic growth. In unequal societies, with wide disparities in areas such as health care and education, people are more likely to remain trapped in poverty, across several generations. 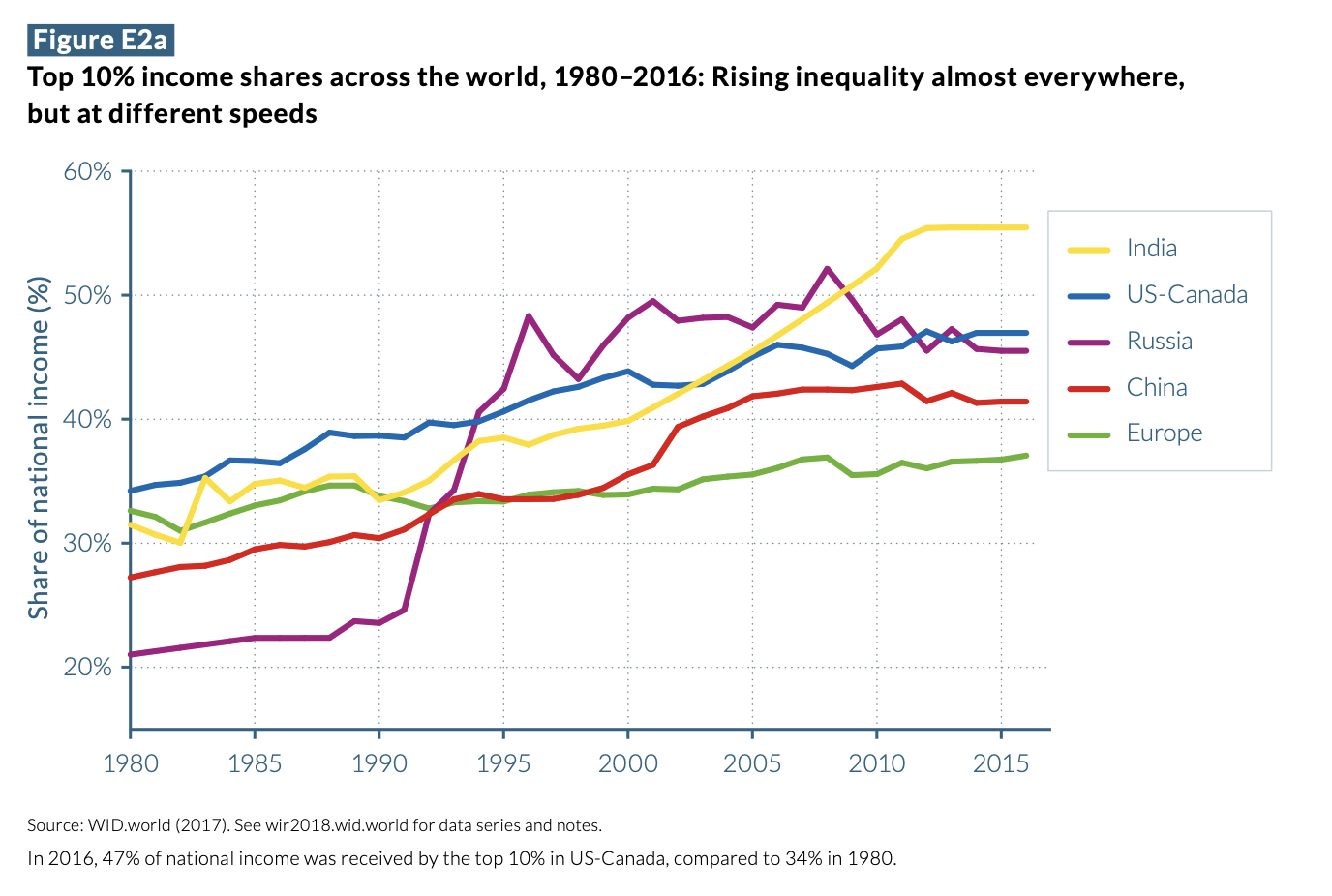 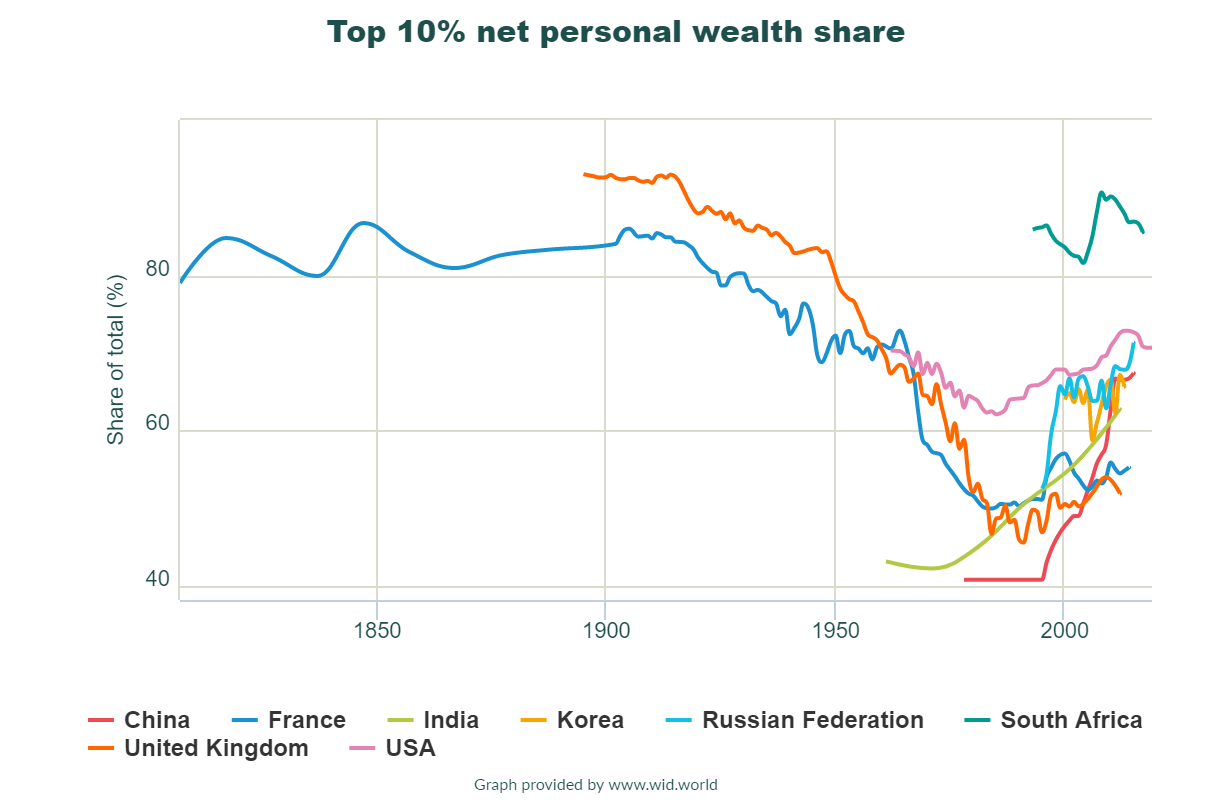 Note: data in wealth share is only available for these countries