About two-thirds endorse the introduction of a wealth tax in Germany, a new poll has revealed. Proposal gets backing from voters across party lines

The poll, conducted by international research agency Glocalities, shows that 66% of people support the proposal that people who own more than 8 million euros should pay an extra annual tax of 1% of their annual wealth to fund the recovery and help people in need. Only 10% of people oppose the proposal. 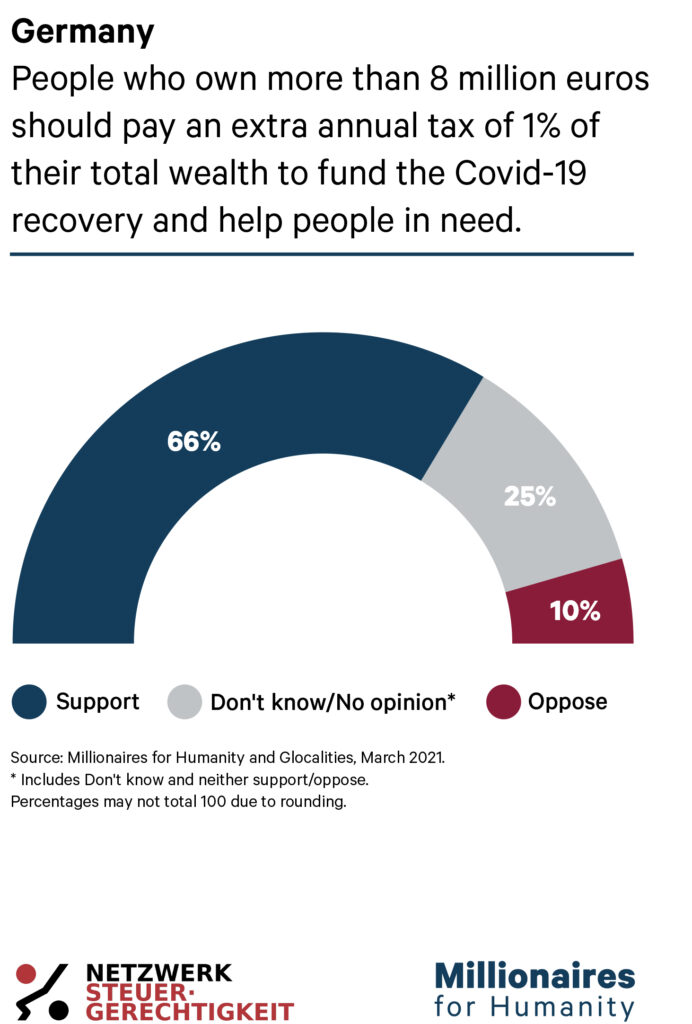 “This result is a message from the public to the politicians. To get out of the crisis and leave no one behind, we need to tax the wealth of multimillionaires and billionaires. As one of those who would have to pay it, I would do so happily, knowing the difference that the tax will make, not only for the fallout from the corona crisis but also to manage the transformation of our economy into a sustainable, just and climate-friendly system,” says Ralph Suikat, a member of Millionaires for Humanity in Germany.

Read more about the press release in German.

Share this article on social media
We use cookies on our website to give you the most relevant experience by remembering your preferences and repeat visits. By clicking “Accept All”, you consent to the use of ALL the cookies. However, you may visit "Cookie Settings" to provide a controlled consent.
Cookie SettingsAccept All
Manage consent

This website uses cookies to improve your experience while you navigate through the website. Out of these, the cookies that are categorized as necessary are stored on your browser as they are essential for the working of basic functionalities of the website. We also use third-party cookies that help us analyze and understand how you use this website. These cookies will be stored in your browser only with your consent. You also have the option to opt-out of these cookies. But opting out of some of these cookies may affect your browsing experience.
Necessary Always Enabled
Necessary cookies are absolutely essential for the website to function properly. These cookies ensure basic functionalities and security features of the website, anonymously.
Analytics
Analytical cookies are used to understand how visitors interact with the website. These cookies help provide information on metrics the number of visitors, bounce rate, traffic source, etc.
Advertisement
Advertisement cookies are used to provide visitors with relevant ads and marketing campaigns. These cookies track visitors across websites and collect information to provide customized ads.
SAVE & ACCEPT